Epic vs. Cerner Competition Heats Up

OREM, UT – February 23, 2015 — Stiffer competition between key vendors is causing a growing number of providers to be undecided about which EMR to purchase when looking to make a buying decision. In the KLAS acute care EMR purchasing plans report released today, researchers found that even though providers have fewer choices due to market contraction, they are less likely to have made up their minds about which system to buy when evaluating future purchases. 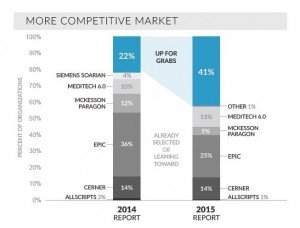 “The competition between Epic and Cerner is closer than it has been in years past as customers determine their future purchasing plans. This has left twice as many facilities “up for grabs” as there were last year,” said report author Coray Tate. “The lion’s share of the remaining customer mindshare is split between MEDITECH and McKesson, pretty consistently along partisan lines.”

Authored by Coray Tate and Colin Buckley, the report is entitled “Acute Care EMR Purchasing Plans 2015: New Energy in a More Competitive Market.” For access to the report you can download the myKLAS app at http://www.klasresearch.com/lp/downloadklasapp or visit KLAS online at www.KLASresearch.com/reports. The report is available to healthcare providers and vendors.