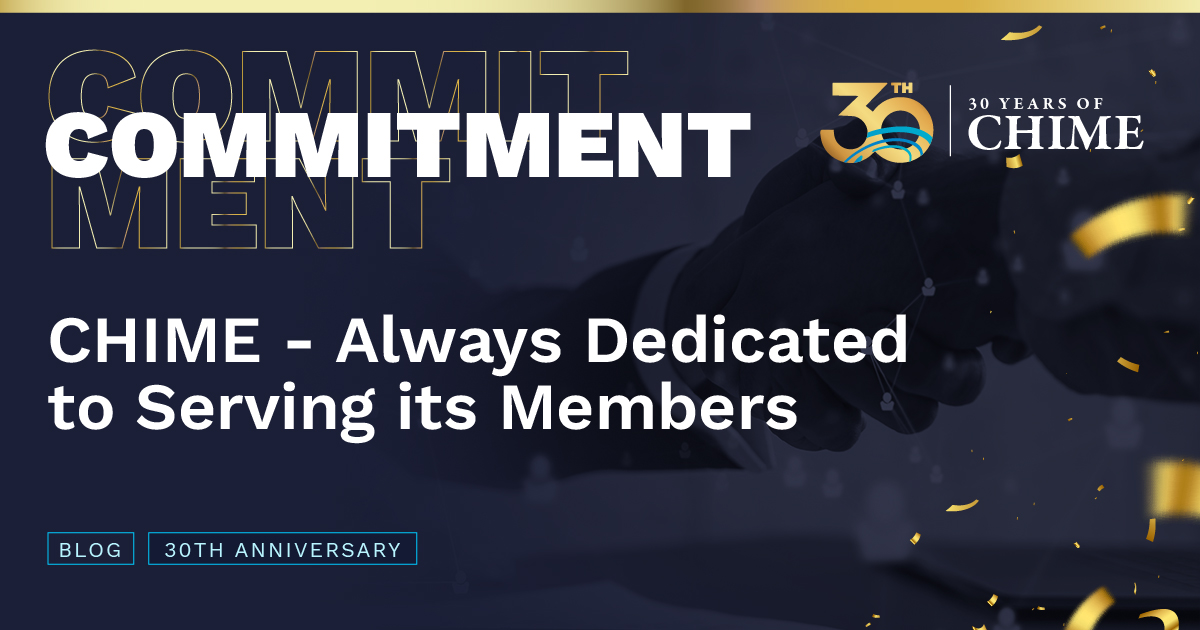 When one thinks of the word “commitment”, what comes to mind might include “delivering on what one promises”, “being true to one’s word”, and “making a pledge and keeping it.”

For thirty years, CHIME has been doing exactly that. From its inception in 1992 – CHIME made the commitment that its members would include senior health IT executives for whom CHIME would provide every opportunity to advance their careers through leadership education, industry knowledge exchanges, and peer-to-peer networking.

And that is exactly what CHIME has done. Over the last 3 decades, CHIME has provided immersive and intense leadership education through its Boot Camp programs to well over two thousand IT executives. Since 1992, CHIME has held nearly 60 forums which have provided the opportunity for dialogue on some of the industry’s most challenging issues. CHIME even kept its promise to gather members virtually during the pandemic to support peer-to-peer networking and information sharing throughout an incredibly difficult time for the membership.

A History of Delivering on Promises

CHIME has a long history of delivering on its promises to its Members. In 2008, when Members were increasingly concerned about legislation that would greatly affect their operations – CHIME committed to formalizing its advocacy efforts and opened a Washington office. Since that time, CHIME has had an active voice in DC representing the needs and concerns of its Members. Through CHIME’s advocacy efforts, significant progress has been made on funding and other issues that are critical for its Members. The dedication to supporting Members’ concerns continues as CHIME pushes hard on resolving the issues around inter-operability, cyber and telehealth funding, and patient identification.

There is also an element of honor and integrity implicit in the word “commitment”. In fact, it is a foundational aspect of how CHIME conducts itself in the industry. The CHIME team demonstrates this by enacting CHIME’s Core Values which are stated,

CHIME is committed to:

This commitment to the CHIME Core Values is visible every day in the way CHIME interacts with its Members and its Partners. CHIME is dedicated to developing meaningful partnerships with its now over 180 Foundation Firm Members. The average tenure for our Partners is over 10 years. Some of CHIME’s Firms have been with CHIME since the inception of the CHIME Foundation and current membership retention is over 90%. Much of this can be attributed to CHIME’s devotion to developing meaningful partnerships with our corporate Members. Evidence of CHIME’s commitment to some of the other values mentioned can be seen in the way CHIME awards, recognizes, and shares CHIME Member stories of tenacious collaboration, innovation, and excellence.

Preparing CHIME Members for the Future

CHIME’s promise to its Members is that it will help prepare them for the future. The field of healthcare IT is going through a deep transformation, and tomorrow’s leaders will require digital health transformation knowledge and skills. In response, CHIME has built a digital leadership education program that provides a pathway from a digital health leadership certificate program, for early careerists – all the way through to a doctoral degree. Additionally, CHIME is preparing its Members for the future by building a Digital Health Community that reaches beyond health IT and connects our membership with other health and care stakeholders across the industry.

CHIME Will Always Support its Members

As CHIME celebrates its 30th Anniversary – it’s Members and Partners can rest assured that based upon a long history of doing so…CHIME will continue to deliver on what it promises. Due to the rapid pace of transformation the industry is experiencing…CHIME’s commitment to do so – has never been more important than it is right now.