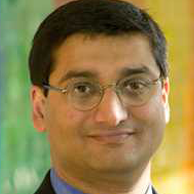 
Indranil (Neal) Ganguly is the Vice President and CIO of JFK Health in Edison, New Jersey. He is a seasoned healthcare executive with extensive experience in strategic planning, system selection, leadership, and governance. Health Information Exchange, patient identity management, public policy, mobility, and the drive to consumer-oriented healthcare are areas of special interest.

Ganguly has responsibility for Health Information Management, Information Technology, Telecommunications and Process Improvement at the 399 bed facility. He joined JFK in 2013 and has lead the organization to attain the Most Wired Designation in 2015 and is currently taking JFK through a full replacement of its application infrastructure in order to support the organization’s drive to address the shift to population health and accountable care models of healthcare delivery.

Prior to JFK, Ganguly spent over 14 years as the Vice President and CIO of CentraState Healthcare System during which time the organization earned four consecutive “Most Wired” designations (2010-2013) and also attained Stage 6 designation on the HIMSS Analytics EMR Adoption Model (EMRAM) scale in 2012. Prior to his tenure at CentraState, he served at Elizabeth General Medical Center, leading the implementation of numerous information technology projects. Ganguly spent the early portion of his career working in the consulting and payer sides of the healthcare industry before moving to the provider sector.

Ganguly is active in the industry and currently serves on the CHIME Board of Trustees holding the position of Treasurer. He is also a member of the CHIME Policy Steering Committee and has earned the organization’s Certified Healthcare CIO designation. Ganguly is a member of HIMSS where he is a Fellow and former Board Member, as well as past-chair of the Public Policy Committee. In addition to being active at the national level of HIMSS, he has served as a board member and past-president of the New Jersey Chapter of HIMSS and past chair of the chapter’s Advocacy Committee.

Ganguly is a member of the executive committee of the board at Jersey Health Connect, the largest HIE in the State of New Jersey covering 30 hospitals, 3,500 physicians and 4 million transactions per month. He is also a member of the advisory board for Fierce Health IT, Advance Healthcare Network and Executive Insight magazine.

In recognition of his work on the CHIME StateNet initiative, Ganguly received the association’s State Advocacy Award in 2011 and was named to the InformationWeek Healthcare CIO 25 list for 2012. He has appeared on the Becker’s Healthcare list of CIOs to Know for the past several years.

Ganguly received a Master of Business Administration from New York Institute of Technology and a Bachelor of Arts from Queens College, City University of New York. He has also authored numerous articles in industry trade publications, and is a frequent speaker at industry events on a wide range of topics from operational challenges to public policy to the future direction of technology in healthcare.