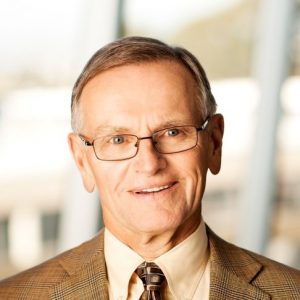 William Spooner has nearly 40 years healthcare experience, having recently retired after 18 years as CIO of San Diego-based Sharp HealthCare. He now serves as advisor to healthcare systems and vendor firms on strategy, innovation and performance improvement. He is particularly interested in emerging payment models (eg ACO’s) and analytics.

During his time at Sharp, Spooner led an aggressive IT effort that placed Sharp on the Hospitals and Health Networks Healthcare’s Most Wired™ list for 13 of its first 15 years. Numerous IT advances in both the business and patient care arenas supported Sharp’s development as the leading San Diego integrated delivery network in a highly competitive managed care environment. IT was cited for its contributions to Sharp’s 2007 Malcolm Baldrige National Quality Award. Sharp placed high on numerous “best places to work” rankings, including #6 on Computerworld’s 2013 Best Places to Work in IT.

Recipient of the 2009 John E. Gall Jr. CIO of the Year award, Spooner is a member the Healthcare Information and Management Systems Society (HIMSS) and CHIME which he served as Chair in 2006. He recently received CHIME’s inaugural Public Policy Award for his HIT advocacy work. He serves on the Boards of the Digital Pathology Association and the San Diego-based Community Clinics Health Network, along with the Healthcare IT News Editorial Board. In 2011 he was named by Information Week as one of the “25 leaders driving the healthcare IT revolution.” He previously served on the Boards of the National eHealth Collaborative (NeHC) and the San Diego Regional HIE. He is a past member of the Healthcare Information Systems Executive Association and Healthcare Financial Management Association.